But we didn’t think. We were talking about the street food in Kolkata and how much Gaya sucked, and what Thailand was like in May. We got on the train because it arrived where they said it would, when they said it would.

It wasn’t until six kilometres later, when our merry mode of transportation ground to halt and stayed halted for oh, twenty minutes, that we began to wonder.

We tried asking our fellow passengers. They laughed and said stuff in Hindi to one another and laughed some more. We gave up. 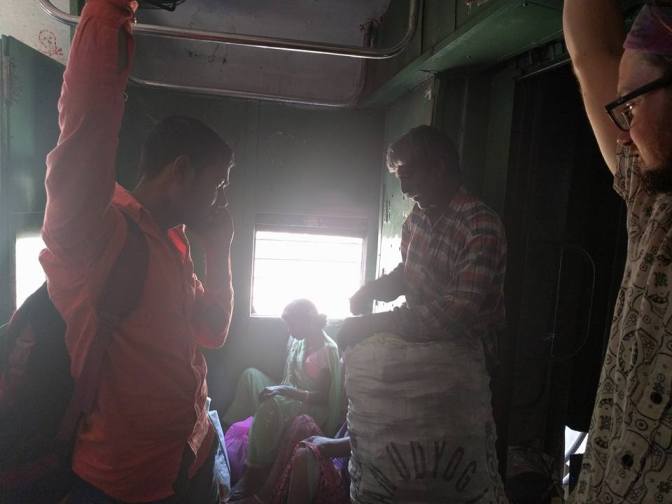 Then, out of nowhere, English.

“This train, not good train for you.” An Indian guy in a clean shirt nodded at us sagely.

“This local train. Not for tourist.”

We laughed again. Such fun! We aren’t tourists! We travellers! We travel with the locals!

The man looked away.

At about that time, another train screamed past. A really fast train.

And still our train sat.

“Er, which train was that?”

I got a funny feeling in my stomach.

A part of me died.

There are some people who might revel in this sort of situation. Lie back and relax. Laugh at the hilarity of their misfortune. Have a nine-hour-natter. Engage in philosophic discussion (through sign language) with their Hindu companions. Indulge in the frequent offerings of roasted chickpeas and peanuts and samosas that ran up and down the five-car train. There are some people who might shake their heads and chortle every time the train stopped for twenty-odd minutes every oh, two or three kilometres.

But I am not, and was not, one of these people.

It wasn’t just the painful slowness. The stop-stop-stopping. The lack of water. The pungent toilet used by a hundred men, women and nappy-less babies. It wasn’t just the goddamn wailing chickpea-walla. It wasn’t even the steely, relentless, empty-faced staring that began at Gaya and continued for nine, nine, dusty, jerking, dragging hours.

It was the fact we’d bought the fucking express train tickets.

Tickets for a train which would arrive in Varanasi at six p.m. Time enough to check into our respective hotels, get dinner, get beers, relax. Watch the sunset. Sleep. Just be in goddamn Varanasi.

But at 6pm, our train was still closer to where it had left than where it was going. Our train, our sodding local train, dustier and dirtier for four hours snail travel, was sitting on the tracks at some nameless station whilst its passengers crowded around a rather stressed little man selling cucumbers.

I was swearing at the filthy floor.

Years later, at 11pm, we arrived. To a Varanasi that had bedded down for the night. To empty streets and howling pie-dogs and hotels that didn’t answer our knocking. To a rickshaw driver with a mouth full of paan and a vehicle he should have tossed in a funeral pyre on the ghats thirty years ago.

Long story short: God quit tormenting us for a short spell and we were able to find hotel rooms. We were in bed by around 1am. Tired, hungry, stunned, broken. Not laughing.

I’m not going to pretend I learned some amazing life lesson or that I emerged stronger for a really shitty experience. I’m not going to look back and laugh. It sucked. Oh, some parts were funny. But I’ve forgotten them.