Usually, my post-5pm run through Dalat’s heaving streets is a vertitable dice with death. Death, and dogs, and trucks and motorbikes and noodle stalls and anything else Vietnam can cram onto wheels and legs.

Tonight, the only thing I might have had to dodge was a tumbleweed.

The whole nation was huddled around TV sets, gripping their caphe den (black coffee), smoking cigarettes, and gritting their teeth.

Remember when the All Blacks won the World Cup? That’s not even close to how Vietnam partied last Tuesday. For the first time in football history, Vietnam had made it into the final of the AFC U23 championship.

I won’t pretend I was aware of this soccer-final-thing. Until last week, I didn’t even know what the AFC was, let alone that Vietnam was in it.

But boy, I learned.

That Tuesday night after their team made the final, Vietnam went absolutelyfuckingnuts. I’m talking motorbike swarms, flags, horns, parades, singing, dancing in the street. Literally. I filmed it.

Being from NZ, I know how excited folks get when the national team wins a thing. We Kiwis get a bit jovial. We drink and sing and paint our faces and wave cowbells. But, y’know, we’re kinda used to it. It happens a lot. We kinda expect to win.

For Vietnam, making the soccer final seemed to come out of nowhere. It was a big deal Something akin to All Blacks AND the Silver Ferns AND the Black Caps AND Lorde winning their respective categories all in the same night. Fifteen times over. Like Elvis waking up and going on tour.

So. Saturday afternoon arrives. The final. Vietnam vs Uzbekistan. 3pm.

I was at the dentist. At 2.30pm, the electricity was cut to the most of the residential areas. Apparently, this was in order to power the giant TV screens installed around the city centre. My appointment was cancelled.

The AFC final was held in Changzhou, China. It was freezing. Snowing, in fact. The Vietnamese players, probably most of whom have only ever known balmy, tropical weather, were playing footy in the snow. In their shorts.

I paused during my run to hang out with the crowd for a bit. Well, to peer at the screen and pretend I understood footy stuff. Dalat’s not a big city in comparison to Ho Chi Minh or Hanoi, but the centre was packed. Every man, woman, child and mutt stood before a screen, chewing their nails, occasionally blasting an air-horn. Faces were painted with their nation’s flag. Cafes were choked with cigarette smoke and bodies. Footpaths outside electronics stores were clogged with motorbikes and their riders, watching the live footage broadcast from store goods. 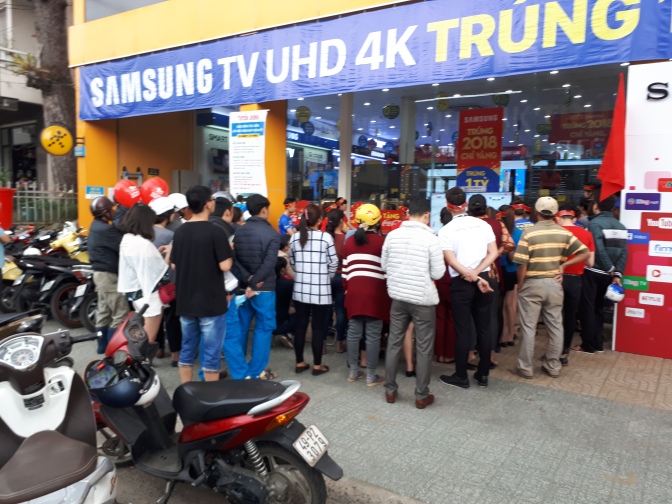 And it stayed 1-all until around 6.15pm. By that time I’d gone home, showered, and come back to stand on the edge of a deeply agitated – but perfectly behaved – crowd. The minutes ticked by. (It was the longest bloody game ever.)Then I went to get a beer, and Uzbekistan did something, and suddenly everyone was climbing on their motorbikes and revving away. Heads hung. Flags drooped.

The depression lasted about twenty minutes. I was halfway through dinner (delicious chao vit, which I highly recommend) at an otherwise empty street food stall when, suddenly, Dalat re-emerged en masse. Smiling, yelling, jovial. Waving flags, blowing horns. Vietnam! Number one! they shrieked at me.

After all, they hadn’t bought all those flags for nothing.

The motorbike rallies tore through the roads all evening. Vietnam! Vi-et-nam! Youth paraded with banners, cars blasted victory music. Everybody bellowed or sang something. Most of them weren’t even drunk. They were happy.

Now, I’m no blood-and-guts sports fan. I’ve watched a couple of All Blacks games, and I mean a couple. But I know how New Zealand takes a win, and I know how we take a loss. And the aftermath of a loss, well. Excuse me if I’m wrong, but when a Kiwi team loses a thing, we cry. We lament, we analyse, we abuse. For weeks. The players are blamed, the coach is blamed (or sacked), the referee/weather/pitch is blamed.  It all sucks, it’s all not fair, and we all have a tantrum and blame something/somebody.

Not Vietnam. Tonight, nobody cried or threw things. I can still hear the horns.

Ka pai, Vietnam. Good on ya.

4 thoughts on “When Vietnam Didn’t Win The Soccer”