So, my first two days in Ethiopia had already sucked admirably. But I had new lodgings, and people had been nice to me at the bar, so things could only get better, yeah?

The morning after the toilet-explosion/hotel-expulsion, I went for a run (as I do). Mid-run, my left shin started to whinge. Then the whinge became a scream. Then it threw a mother-and-father of a tantrum to the point of denying gravity, and that was the end of my run.

I’ve had a few (ha!) running injuries in my time, and I know when something’s gonna stick around for a while. And this hot mess of pain in my shin was fixing to stick around til at least next century. (Months, as it turned out, which is long enough).

I hobbled back to my hotel, moaning, cursing, in the rain, while folks stared and cackled.

(On the way I saw a dead guy getting stretchered off the road, which momentarily gave me some perspective, but then my fickle mind forgot about him and I went back to The Leg).

Back at my hotel, the internet had packed up completely so I couldn’t even google my symptoms.

Pretty shitty, yeap. But pain can be numbed and internet can be sourced. What I couldn’t fix, not that day or any day after, was the men.

Alright, so I get that many young Ethiopian men won’t be schooled in the ways of feminist thought. Or schooled, full stop. And perhaps the women around them aren’t either.

But I won’t forgive them. Because surely it doesn’t take a heck of a lot of schooling to figure out that hooting and cooing and smacking your lips at a passing female will not win her heart.

They were relentless. For every five steps I took I received a barrage of whoops and hollers.

Every. Five. Steps. I am not shitting you.

But there, in the ugly streets of Addis Ababa, on my own (and hobbling) it wasn’t funny. It wasn’t even interesting. It was aggressive, leering, demanding and downright fuckn scary. 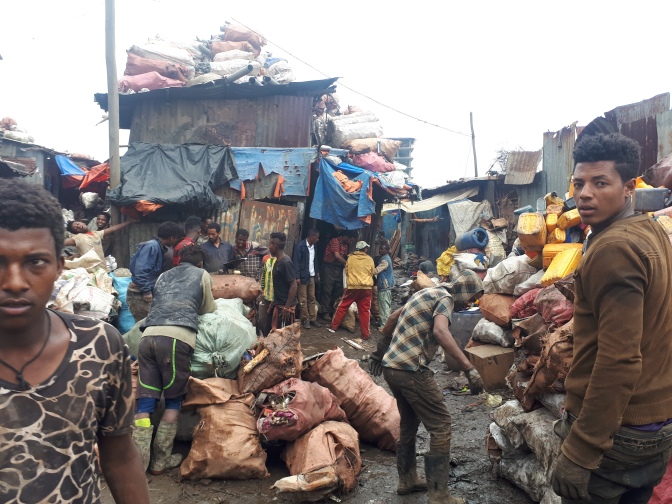 And they weren’t just young dudes. They were young, old, fat, thin, rich, poor. Anything with a Y chromosome was shrieking and gyrating like Hugh Heffner on crack.  Whole groups of men would fall silent as I passed, each one running their eyes up and down my body. Then, “Yes madam! Come for me sexy time!” And they’d all fall about whooping in glee.

If they weren’t cat-calling, or staring, or gyrating, they were laughing. Christ, the laughter! They looked at me and went into hysterics. Elbowed their mates, snickered, tittered, gyrated some more.

Trying to describe it right now is impossible because no words can describe how shitty it was.  Cornered, exposed, hunted. And rather f*%$ed off.

In fact, thinking about it now is bothering me all over again, so I’m gonna bury that shit and move on. 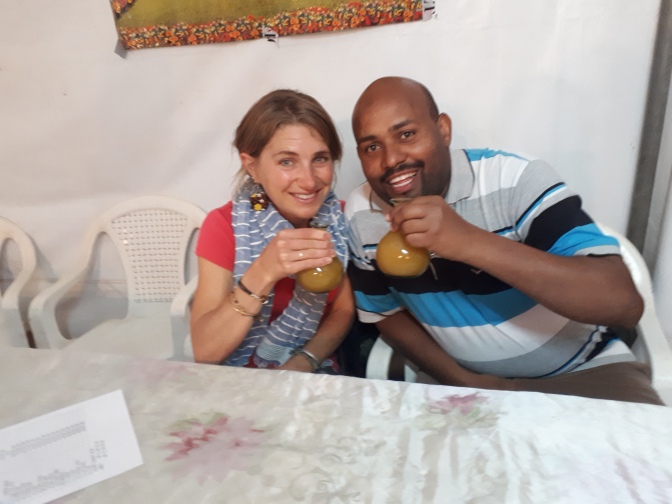 Actually, I hate tours. But, having figured out that Addis Ababa was no place to wander alone, I found a reputable company and Samson was the smiling dude who picked me up the next morning.

You know those people who get so madly excited about a subject that flecks of spit fly while they talk? That was Samson in Addis Ababa’s church, explaining the history of Christianity. He showed me every inch of the chapel and read to me in Amharic. 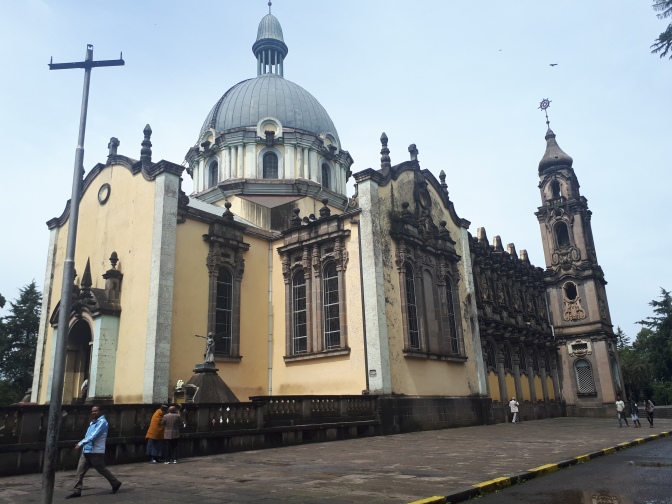 He took me up Entoto hill for its incredible view of Addis, and agreed to walk down again (for the exercise). He showed me the grizzled innards of the filthy city. He took me to lunch and we ate something reminiscent of curry and gristle.

He sympathized when I bitched about the aforementioned issues with the men. He took me to a bar for beer (he had malt because he doesn’t drink while working) and then, when he’d ‘finished’ working, took me to a rowdy fair where were drank tej. Tej is this oddly sweet, smoky honey wine drunk from a beaker. It’s so damn good and so unlike alcohol you don’t realise how much you’ve knocked back until you go to stand. Fortunately, neither of us were driving.

In fact, we were both so sozzled that I forgot to pay him and he forgot to ask, so we had to meet up again two nights later at another bar, where we got sozzled all over again. So that was fun, and proof rather that not all Ethiopian men are fuckwits.

(If you do plan to go Ethiopia (though god knows I’ve done nothing to sell the idea to you) do call Samson. He’ll look after you.)

Oh, there’s more to tell about Ethiopia. And, no, I haven’t struck it off my list. I will go back – mended, stronger, and wiser for it. Probably Samson and I will go drink gin again.

Some places suck. Some people suck. But for every sucky thing there might be something really great. Even if it’s just tej out of a beaker, or a big Ugandan guy paying for your carrot juice (that really happened). Anyway, whatever. I’m not satisfied with my Ethiopian experience, and there’s only one way to fix that.

2 thoughts on “once bitten, twice bitten.”